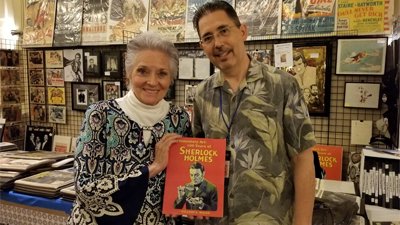 Above: Bill with actress Lee Meriwether, at a collectibles show in Los Angeles, at which Ms. Meriwether…a huge Sherlock Holmes fan, excitedly purchased a copy of Bill’s book.

Through an unusual course of events, Bill found himself surrounded by one of the largest collections of Sherlock Holmes items ever amassed. The collection was slated to be sold off, and Bill knew that many of these one-of-a-kind items had not been seen since the their original debut…some over one hundred years ago. As a collector, Bill also knew that many of these items would never again be seen by the general public. That collector mentality drove him to document the collection, and ultimately share these rare items in his first book, “Elementary Art: 100 Years of Sherlock Holmes”.

Bill has held book signings from Hollywood, CA to Columbus, OH. While on a 2018 trip to Columbus, Bill was thrilled to meet film historian Leonard Maltin (who Bill grew up watching on shows like Entertainment Tonight). This highly respected film expert wrote a very gracious review of “Elementary Art” (shown below).